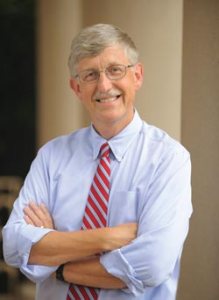 In his remarks, Dr. Collins noted that the NIH has worked diligently to enhance human health, lengthen life, and reduce illness and disability. He acknowledged that the leadership, employees, and grantees passionately believe in the NIH’s mission. He said that the foundation of basic science has driven NIH’s ability to understand disease for more than a century through diagnosis, treatment and prevention.

Dr. Collins stressed the NIH’s intent to lead the charge on the recently unveiled Precision Medicine Initiative (PMI). He reminded the subcommittee that the near term goal of the PMI focuses on cancer and added that cancer research has been leading the way in precision medicine for many years, by defining the driver mutations in individual tumors and using this information to design ideal therapies for each patient. He said the PMI seeks to accelerate discovery and expand current cancer genomics research to understand the development of resistance to targeted therapy, to apply non-invasive methods to track patients’ responses to treatment, and to explore the efficacy of new drug combinations targeted to specific tumor mutations. Highlighting a young woman’s epidermal growth factor receptor (EGFR) mutation and her positive response to the drug Tarceva, Dr. Collins said the PMI would allow researchers to do groundbreaking, historic work.

Dr. Collins noted that the President’s FY 2016 budget request for the NIH is $31.311 billion ($1 billion above the enacted FY 2015 level). Supporting the president’s request would allow 10,303 new and competing Research Project Grants (RPGs) to be funded in FY 2016, an increase above FY 2015 grant levels. The budget would also provide the capacity to improve the health of our nation and the ability to maintain the U.S.’ standing in biomedical science and develop new therapies, he said.

Reminding the subcommittee that China is now filing more patents in medicine than the U.S., Dr. Collins said that we are in danger of relinquishing our standing in biomedical research. While the subcommittee’s Ranking Member Rosa DeLauro (D-CT) recommended doubling the NIH budget, Dr. Collins suggested the best thing for the NIH would be a budget that is on stable growth trajectory and that keeps pace with inflation, plus a little bit more, which would allow the U.S. to flex its innovative muscles.

Chairman Tom Cole (R-OK) communicated his commitment to making NIH funding a priority for the subcommittee and offered to do what he can to support the NIH, despite funding restrictions imposed by budget caps.

There are two foreseeable opportunities for a breakout in federal funding for cancer research, according to Erik Fatemi, Vice President, Cornerstone Government Affairs.  One, during Congress’ “lame duck” session, which ends December 11, legislators will, presumably, make a decision to pass either a year-long budget or a short-term continuing resolution. Two, Congress will soon reconsider whether to raise budget caps for nondefense spending, including biomedical research.

Either way, Fatemi said, cancer researchers have a good story to tell, and they should tell it. 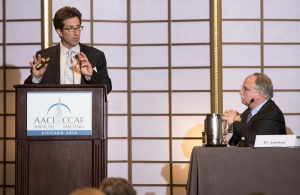 Fatemi provided an outlook on National Institutes of Health funding during AACI’s 2014 Annual Meeting, held in Chicago at the end of October. Before joining Cornerstone, a Washington, D.C.-based consulting group with offices in seven other cities, Fatemi served 12 years as a senior staff member on the Senate Appropriations Subcommittee on Labor, Health and Human Services, and Education under Chairman Tom Harkin (D-IA).  He also served as the subcommittee’s staff director from 2010 – 2013.

Fatemi urged meeting attendees to invite a member of Congress to their own cancer center, noting that it would make the lawmaker proud to be representing such an important enterprise, and it may give them incentive to fight for NIH funding.  Fatemi recommended that cancer researchers explain what they would love to do with their research, if sufficient funds were available.

“Don’t just say, ‘We need more money,’” Fatemi said. “Say, ‘We’re on the cusp of this amazing breakthrough, and we need your help.’”

Putting NIH in the context of overall government funding, Fatemi explained that “discretionary appropriations,” which include NIH, are divided into 12 annual appropriations bills, the largest of which, the defense appropriation, covers about half of all discretionary spending. NIH is a large component of the Labor, Health and Human Services bill, comprising about one-sixth of it.  However, NIH struggles to compete for funding with other good priorities within the bill, like education. Since its budget was doubled between 1998 and 2003, NIH has lost almost a quarter of its purchasing power, Fatemi noted.

Hopeful that the word is out and that legislators realize there is a serious problem with biomedical research funding in this country, Fatemi said he believes that NIH can succeed in attracting more support, despite the tight fiscal environment.  Growing concerns about the impact of budget cuts on young researchers, innovation, and global competitiveness may set up NIH as an exception to Washington’s budget-trimming ways.

Fatemi noted that the recent Ebola outbreak created a new wrinkle in the bipartisan support for NIH funding, with Democrats and Republicans clashing over the impact of budget cuts on the development of a vaccine. But he said he hoped that controversy would settle down soon.

Samir N. Khleif, MD, director of AACI-member GRU Cancer Center at Georgia Regents University, testified before the U.S. House of Representatives Committee on Appropriations Subcommittee on Labor, Health and Human Services, Education, and Related Agencies on Tuesday, March 25. Dr. Khleif, a respected researcher and advocate in the cancer community, stressed the need for increased National Institutes of Health (NIH) funding for cancer research and the need for more funding devoted to the elimination of cancer health disparities, particularly among minority and economically disadvantaged populations. Dr. Khleif requested that the Subcommittee propose a budget of $32 billion for the NIH in FY2015, in order to keep the brightest scientists at cancer centers focused on biomedical breakthroughs. GRU Cancer Center at Georgia Regents University is focused on reducing the burden of cancer in the State of Georgia. A list of hearing witnesses can be found by visiting this link. A GRU press release about Dr. Khleif’s appearance is here.