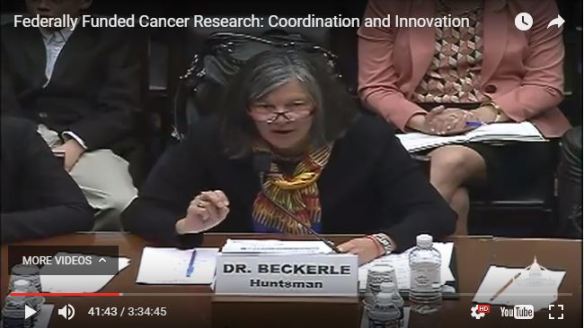 AACI thanks Chairman Jason Chaffetz (R-UT), Ranking Member Elijah Cummings (D-MD) and members of the Committee for welcoming the witnesses and learning about the importance of federally funded cancer research.

In his opening remarks, Chairman Chaffetz noted his own family’s experience with cancer as his mother succumbed to breast cancer after a ten-year fight.  He said he objected to the president’s proposed budget for Fiscal Year 2018 for the National Institutes of Health (NIH).

Ranking Member Cummings said there are few investments more significant than those made in biomedical research; that the work of the NIH is transformational and has the power to turn ideas into cures.  He noted research generates economic activity in every state across the country and allows the U.S. to grow the science and technology workforce to the benefit of individuals across the world.

During her testimony, Dr. Beckerle noted the federal government has an unmatched and irreplaceable role in supporting cancer research, saying “no other public, corporate, or charitable entity is able to provide the broad and sustained investment in research necessary to enable successes.”

For her part, Dr. Jaffee noted the state of science and medicine are at a crossroads.  She said the cancer community is in the middle of a revolution, turning decades of government investment into real treatments that are saving lives, yet the instability of government funding for research without significant increases in the past decade has created a crisis as young scientists are turning elsewhere for positions outside academia or outside the U.S. altogether. Dr. Jaffee said the U.S. stands to lose the brightest minds.

Dr. Jacks acknowledged the investments in the NIH and NCI have been the foundation of progress against cancer and have allowed the U.S. to enter a new era.  He said the research is an effective use of taxpayer dollars and the bulk of the support in universities and other laboratories comes from the NIH.

Mrs. Carr suggested rather than decreasing the NIH budget, Congress should provide increases in order to help patients like her son, Chad.  Many members of the Committee agreed with Mrs. Carr and expressed their disapproval of the president’s proposed budget for Fiscal Year 2018.

At a time when funding for biomedical research is under threat, AACI expresses its gratitude to Chairman Chaffetz, Ranking Member Cummings, and other members of the Committee for showing their support for federally funded cancer research.  Stable, predictable funds for the NIH and NCI are vital to making progress in cancer prevention and advancing cancer research and treatment to benefit all patients.